Communion in Mombasa By Idelette McVicker 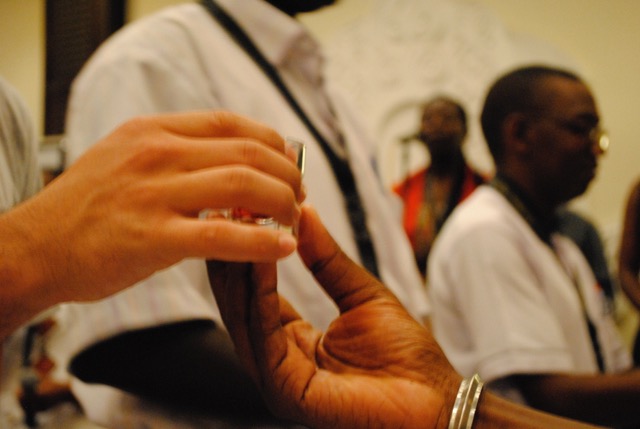 “There are some wounds. only africa can heal.” –nayyirah waheed, salt

I am a daughter of Africa and yet I was in my late 30s, before the door into the continent finally creaked open. I had been to China, Mexico and Australia before I ever set foot on the rest of our continent.

During my growing up years, there were no visas for the white Afrikaners who implemented Apartheid. We visited Germany, England and Belgium, instead.

In my younger years, Africa did not have my face. I lifted my eyes to Europe and beyond, like a daughter who turned her heart away from her mother, thinking the woman across the street had better bobotie.*

Then democracy broke through in South Africa and we sang freedom songs in the lineup to vote. Even though wanderlust called and I moved away shortly after that, a deep hunger grew in my heart.

I know now: We can’t deny where we come from.

With that same hunger, grew a sense of unworthiness. Most days I could avoid it, until someone asked, So where are you from?

Then my white face and my Afrikaans accent gave me away and for the first time in my life, I felt deep shame for being an Afrikaner. I suddenly felt like the face of a pariah people. I felt like I deserved my self-imposed exile.

I dared not enter the gates into Africa again.

I was not worthy of her face.

I was not worthy of her soil beneath my feet.

I had rejected her and, of course, I argued, she would reject me.

Around my 37th birthday, I learned about a hairdressing school in Nairobi that empowered women to walk out of the chokehold of poverty. A friend told us how the local church had trouble keeping the school open due to the rent. It was one small sentence in a whole story, but it kept tugging at my thoughts. I kept wondering, What if I could do something?

Saying yes to doing something, felt like small act of solidarity. I could do that one thing.

Then I heard about Amahoro Africa, a gathering of theologians and practitioners from mostly western and southern Africa, who gathered every year in friendship and conversation.

I was planning on going to my 20th high school reunion near Cape Town that year. But as we approached the time to register for Amahoro, I knew I desperately wanted to go to Kenya.

So, I booked a ticket to Mombasa. My hands shook.

When I landed, I stood on that tarmac in Nairobi and took pictures of the sky. I couldn’t believe I had finally been allowed access …

I, who had denied others so much, was now allowed in.

I was finding a piece of myself in the sunshine and the expanse of the sky. I walked comfortably on the sidewalks and didn’t skip a beat.

I was at home in that vastness, in the hustle and bustle and the rhythms on the street.

I flew to Mombasa and my heart felt like it was beating outside my chest. I felt like I could burst with the goodness of being on the soil of my soul.

The same happened during worship.

I sat down for meals and got to know friends from Burundi and the Democratic Republic of the Congo and Zimbabwe and Rwanda and South Africa and I wanted to cry to myself: Do you get how beautiful this is? Do you get how healing this is? Do you get how many walls are broken down with a single conversation, a smile, a hug, a shared meal? I could feel the dismantling of the apartheid in my own soul.

My heart soaked it all in. Every day. Every conversation. A gift.

Then, on the last day, we were invited into Communion.

Come with a friend, they said. Come, have communion together.

People went up and I sat, my heart beating wildly. Who would I go with?

Then my eyes met the eyes of a sister from the Democratic Republic of the Congo.

We held the cups and my hand was shaking so badly, I could hardly serve her.

Does she not know who I am? This white daughter of Apartheid?

She held the bread and I ate … so hungry.

Jesus’ body, broken for me.

So unworthy of her grace, sharing the sacrament with me.

Jesus’ body, broken for every one of us.

Jesus’ blood, shed for you, she said.

I sipped the cup.

We shared the holy meal and the moment was eternally drenched in Light. We stood as sisters at that table.

We stood in a world in which everyone belongs at the table and I felt a little closer to the world as God intended: reconciled, forgiven, deeply graced.

Idelette is an immigrant, mother of three, restaurant wife and Founder and Editor-in-Chief of SheLovesmagazine.com. She was born and raised in South Africa where her eyes were opened to how insidious injustice can be. She found Jesus around a breakfast table in Taiwan.

Idelette now lives in Surrey, Canada, but her home is the world. She loves Jesus, justice and living juicy.

So incredibly powerful… thank God for the healing you have experienced!

[…]    “There are some wounds. solely africa can heal.” –nayyirah waheed, salt I’m a daughter of Africa and but I used to be in my late 30s, earlier than the door into the continent lastly creaked open. I had been to China, Mexico and Australia earlier than I ever set foot on the remainder of our continent. Throughout […] Godspace […]

Idelette, daughter of the African soil, my heart sister. Your words drip with vulnerability and grace. Never doubt the roots of your being!
Thank you for the reminder of the profound grace we receive as we partake of the one bread and the one cup at the table that is the beautiful leveler.

Thank you for holding my hand as we walk together, stand together and partake together. The beautiful leveller. Love that.

Thank you Jesus, thank you Idelette. Your writing made me cry, for it is such a powerful truth that we until we get reconnected to our roots and to the whole world, we remain estranged from our inner soul where we are one with God and with each of God’s children. God bless and keep you.

Dear Cornelius, thank you! Thank you for reading and I’m so grateful we can stand together at the Table, all of God’s children, knowing the Grace that brings us there.