Chosen Ones by Jean Andrianoff 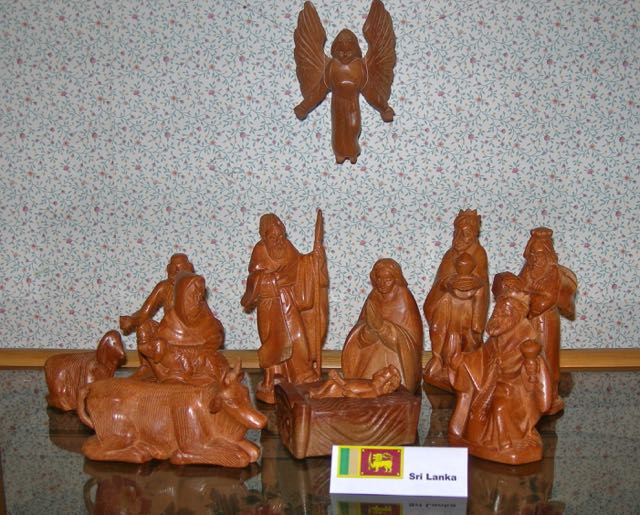 And in the same region there were shepherds out in the field, keeping watch over their flock by night. And an angel of the Lord appeared to them, and the glory of the Lord shone around them, and they were filled with fear. Luke 2:8-9

Imagine your feelings as a shepherd, mechanically carrying out your night watch—probably a little cold, a little bored, listening to the snuffling and bleating of the sheep, trying to stay alert for any indications of impending danger, but not really expecting so much as a fox to scuttle past the flock. Then suddenly the darkness and stillness of the night is shattered by the glorious appearance of an angel of the Lord—an event no more anticipated in the shepherd’s daydreams than in ours. No wonder, as the King James Version puts it, “they were sore afraid.”

In most of our nativity sets, the shepherds lean placidly on their staffs gazing serenely at the infant Jesus. I like the posture of the shepherd in this Sri Lankan set, as he doffs his hat (yes, he has a hat!) and kneels in reverence beneath the descending angel. He responds in submission to the sudden glory that has overtaken him and his companions as they carried out their ordinary and lowly tasks.

In our modern world we tend to sanitize and glorify the occupation of a shepherd, picturing a gentle man clothed in pristine white robes, holding an equally immaculate and placid lamb. No dirt and no odor. The lamb does not squirm or struggle. Yet shepherds in first century Palestine were a despised class, not yet elevated to our romanticized version. They lived outside with the sheep, and most likely did not bother with the niceties of bathing and tooth brushing. And shepherds, in spite of the responsibility their profession required, were often regarded as disreputable and dishonest.

Yet God chose to honor those of low esteem in human terms by entrusting the shepherds with the first announcement of His Son’s birth. The angel did not appear to the priests in the temple, but to the shepherds in the fields. God seems blissfully oblivious to our human prejudices and social structures. As Paul reminds the Corinthians:

If you are one God has blessed with the gift of belief in His Son, count yourself in the company of the shepherds, chosen not because of your status or competence or goodness, but simply gifted with grace.

Jean Andrianoff and her husband David spent 25 years in Asia where they began collecting the nativity sets that inspired this selection. They now live on the Olympic Peninsula in Washington State, where Jean finds inspiration for writing from God’s creation, family, life experiences and her faith in Jesus. She blogs with a group of like-minded friends at www.wordways.org and is the author of Chosen for a Special Joy.

Let All Creation Sing for joy

Resources for the Christmas Season: Updated for 2020

Light a Candle for the Unsung Heroes

Prayers for the Fourth Sunday Of Advent –...

Bringing my whole self to the manger by...

The Beginning by Michael Carroccino