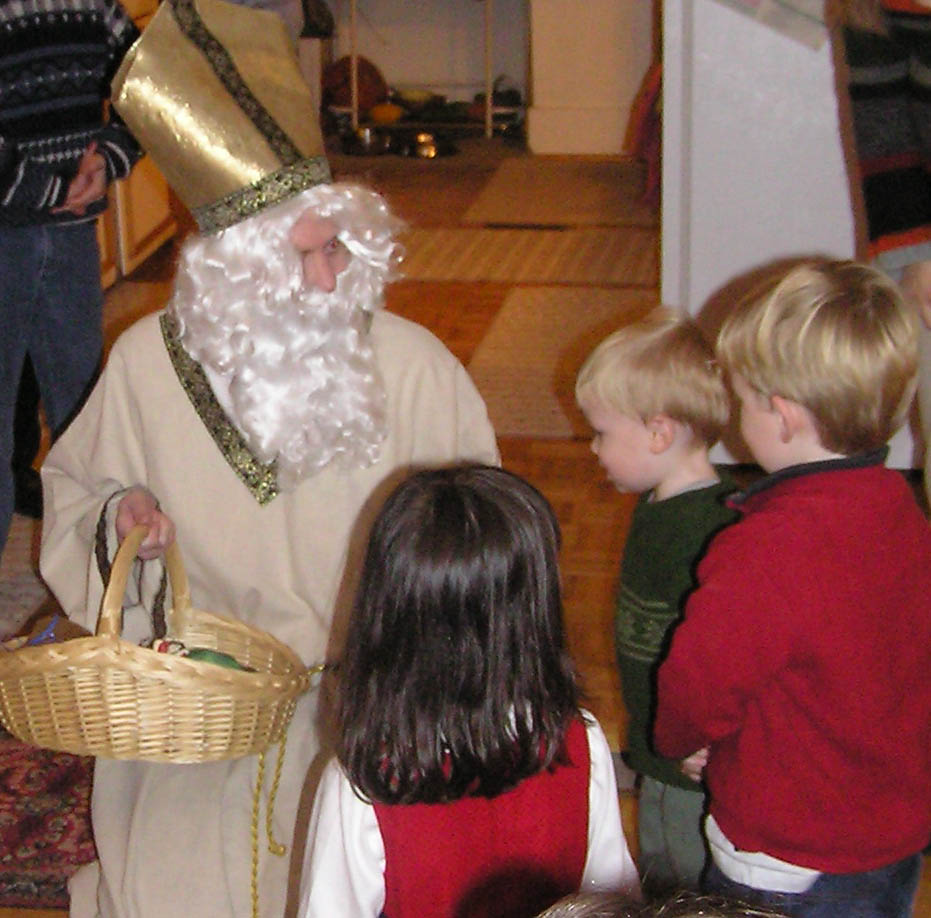 The true story of Santa Claus begins with Nicholas, who was born during the third century in the village of Patara. At the time the area was Greek but is now on the southern coast of Turkey. His wealthy parents, who raised him to be a devout Christian, died in an epidemic while Nicholas was still young. Obeying Jesus’ words to “sell what you own and give the money to the poor,” Nicholas used his whole inheritance to assist the needy, the sick, and the suffering. He dedicated his life to serving God and was made Bishop of Myra while still a young man. Bishop Nicholas became known throughout the land for his generosity to those in need, his love for children, and his concern for sailors and ships.

Widely celebrated in Europe, St. Nicholas’ feast day, December 6th, kept alive the stories of his goodness and generosity. In Germany and Poland, boys dressed as bishops begged alms for the poor—and sometimes for themselves! In the Netherlands and Belgium, St. Nicholas arrived on a steamship from Spain to ride a white horse on his gift-giving rounds. December 6th is still the main day for gift giving and merrymaking in much of Europe. For example, in the Netherlands St. Nicholas is celebrated on the 5th, the eve of the day, by sharing candies (thrown in the door), chocolate initial letters, small gifts, and riddles. Dutch children leave carrots and hay in their shoes for the saint’s horse, hoping St. Nicholas will exchange them for small gifts. Simple gift-giving in early Advent helps preserve a Christmas Day focus on the Christ Child.

When I was on the mercy ship M/V Anastasis, we always celebrated St Nicholas day. Many of the children from all cultures  joined the Dutch kids in leaving their shoes outside in expectation of St Nicholas bringing them small gifts, and as the afternoon of December 6th progressed, St Nicholas appeared loaded with a bag of toys he distributed.  I think that this is a wonderful tradition that can separate the celebration of Christ’s birth from the giving of gifts.

For a wealth of information, stories, plays, recipes, and customs about St. Nicholas, how his image evolved into Santa Claus, and how to celebrate his feast as part of Advent, see www. stnicholascenter.org.

Food ideas
The feast of St. Nicholas is celebrated in so many places that recipes and activities could easily fill several books. Use the above- mentioned Web site for recipes from the Netherlands, Poland, Germany, Switzerland, Czech Republic, and Ukraine. Both traditional recipes as well as those using convenience goods are included. However I like this simple soup from Twelve Months of Monastery Soups: International Favorites by Brother Victor-Antoine d-Avila-Latourette. (Liguori Publications 1996) Used by permission.

half a medium-sized head white cabbage

1 teaspoon salt or more, according to taste

4 quarts water (editor’s note: you may want to use less water)

Wash and peel the vegetables. Slice them into small pieces. Melt the butter in a large soup pot. Add the vegetables and salt and stir a few times. Turn off the heat, cover the pot, and let it rest for about 15 to 20 minutes. Add the water and bring the soup to a boil. Reduce the heat to medium-low, cover the pot, and allow the soup to cook slowly for about 30 to 40 minutes. Stir from time to time. When the soup is done, blend all of it in a blender until it becomes creamy and even. Serve hot, adding some croutons to each bowl and sprinkling some chervil on top. 6–8 servings.

6 slices French bread (or Italian, or any other of your choice), sliced in cubes

dash each of dried thyme and dried parsley

Pour the oil into a pot, add the garlic, bread cubes, and herbs. and sauté them over low heat for 3 to 5 minutes. Stir and turn constantly. Remove the croutons and keep them in a lightly warm oven until you are ready to use them. Croutons are especially useful as garnish in thick, creamy soups.

Story for Children: A Gift in the Night

This story explains how Nicholas became known for his secret gift giving. Children will need to understand that long ago, it was necessary that a bride’s family gave a gift of money to the groom’s family. Without the money, young women could not marry, and if they or their family could not support them, some became slaves.
In the spirit of St. Nicholas, prepare some “sacks of gold.” Put a few Christmas cookies or candies into a square of tissue paper and tie this into a bag with ribbon. Then, after dark, sneak around to friends’ houses to secretly leave the goodies at their doors. Run away quickly! If this is not feasible, your children can leave secret treats at church offices or for children in another classroom.

Decorate
Then celebrate by setting a table with rich colors of reds and golds. Add any images (statues, cards, illustrations) you have of St. Nicholas as a bishop. At this dark time of year, many votive candles add atmosphere. Enjoy your feast, read additional stories from the St. Nicholas Center Web site, and appreciate the sense of mystery that can sometimes be felt on this feast day!

He snuck out in the nighttime.
He left gifts in the darkness.
He helped many, many people,
Because he loved God so much!

Who is this secret person?
Who is this mystery?
He’s called St. Nicholas,
But he’s also you and me!

Ativity and prayer from A Circle of Saints: Stories and Activities for Children Ages 4–8 by Anne Neuberger, © 2009, Twenty-third Publications, New London, Connecticut. Used by permission.

Podcast for the Second Week of Advent

Baking Up A Storm.

Let’s Get Started With Our Christmas Cake

The Art of Bread Making

Let’s Get Creative With Tomatoes

Lets Get Creative With Our Cooking – Cherry...