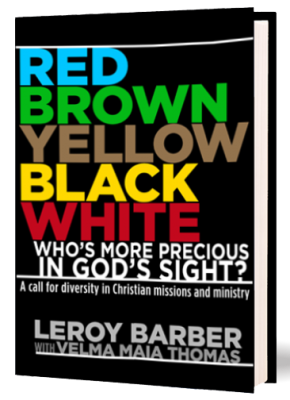 Staff and leaders of mission organizations in the U.S. are overwhelmingly white. Mission conferences, though advertising ethnic diversity do not always represent multicultural or multiethnic expression because the style of the conferences is still monocultural and presented in an Anglo context. This lack of racial diversity and sensitivity hurts the cause of Christ.

So says Leroy Barber in his provocative and heart wrenching book about race and Christian mission. I found myself weeping and rejoicing, repenting and praying as I read Leroy’s accounts of the many times he and other African Americans were slighted and marginalized within mission organizations. The hidden racism that often emerged in subtle ways as African Americans were judged more harshly than their white colleagues or as funding and support dropped off just because an African American was put in charge appalled me. Even our models for raising mission support are geared toward white middle class young people, and we don’t even think about it, except possibly to bemoan the lack of diversity.

Leroy writes out of his own pain and disillusionment as a black serving and leading in ministries dominated by whites, who hold both the decision making and the funding power. He also writes as one who has found the joy of being part of ethnically diverse communities in which whites and people of colour work together to bring about change in order to more authentically reflect God’s image.

Leroy Barber offers practical suggestions on how to diversify mission Boards, mentor people of colour into leadership and sensitize ourselves to the subtle forms of racism that often exclude African Americans, Asians, Native Americans and Latinos from leadership or silence their decision making power. In the process we hurt the cause of Christ and diminish the impact of the gospel.

Red Brown Yellow Black White Who’s More Precious In God’s Sight? is a challenging but must read book for any who want to follow Christ with the intention of seeing glimpses of God’s kingdom coming into being through mission. As Leroy says:

Missions represent God’s kingdom on earth. We need to grow together as Christians to get rid of the prejudice and division that our predecessors have seemingly cemented into our ethos. (15)

He goes on to make this very sobering statement:

Missions is living the way things should be. Missions is a way of life devoted to making justice, equality, and grace prevail in broken lives, including our own. It is making shalom a reality.

What about the church? It would seem to me that the church would hold missions agencies accountable about issues of race and diversity. But sadly, the problem of racism persists within the church; therefore the church is in no position to critique others. Missions organizations that perpetuate racism and dependency are a reflection of the church’s condition. (202)

Yet Leroy sees hope and believes missions can help us get rid of the separation as we learn to serve together in new ways with new understandings and attitudes.

Jesus prayed in the garden before his death that we would be one people. We have a lot of work to do to become one heart and one mind. Locked into most churches is a designation or race or culture that separates, that shapes our view of each other and of God, leaving us isolated and divided. We are not the Church. We are at best, thousands of small pieces that contain strands of the Church. The Church does not have walls and designations; it is people from every walk of life pursuing the Kingdom of God here on earth. The Church is one expression of God here on earth. (203).

Leroy concludes by saying “God is at work in the universe” and I believe God is at work through Red Brown Yellow Black White Who’s More Precious In God’s Sight? encouraging all of us to listen deeply to those of other cultures in ways that draws us together into the people of God and community of God we are meant to be. I hope that like me you will not only read this book but be changed by it.

A Journey Toward Home – An Exciting New Resource Now Available.