Today’s post is contributed by Evelyn Bence. It is a late addition to the series Hospitality: Opening Doorways to the Kingdom. I received a copy of Evelyn’s new book Room at My Table, a couple of days ago and read through the delightful reflections (52 of them) in one sitting. It is not the way they should be read as it would be better to read each one slowly over a cup of tea. It would also make a great read for a book club or small group, preferably getting together over one of the meals for which recipes are provided. 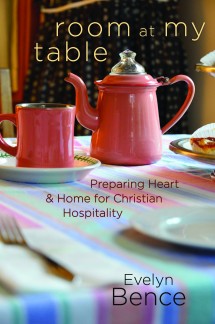 When my parents died, midsummer in two consecutive years, I silently waited for several “good old friends” to call ahead or simply knock on the door and offer me a plate of cookies if not a “covered dish.” I should have forgotten my disappointment by now.

One of those friends recently posted one sentence on Facebook: She had lost a dear one to death. By the time I stopped by to express condolences and drink tea, she had received sixty-five Facebook comments; most of them fewer than fifteen words, summarized as “I’m so sorry” or “I’m praying for you.” Were the short sentiments helpful? I asked.

“Absolutely! Why would you even wonder?”

“It’s so easy to press send. Done. It’s not exactly the same as delivering a casserole.” Oops. I suddenly realized that I had knocked on her door empty-handed, on this particular busy weekend sensing that my presence and conversation would speak comfort aplenty.

“But they”—those sixty-five well-wishers—“aren’t ‘casserole friends,’” she said, clearly including me in the category. “A lot of them live out of town. They’re college friends or former work colleagues. Or they’re casual church acquaintances . . .”

“Casserole friends.” The phrase makes me smile. How many of us wish we had a few more of them, people who show up with nourishment on tough days? For the grieving, maybe a quart of soup several weeks after the burial. For the caregiver, maybe some pick-up snacks. For the geriatric set, maybe a delivery conversation more prolonged and personal than the stereotypical hello-good-bye of Meals-on-Wheels. In his last widowed year, my dad valued a parishioner who occasionally brought dinner and then stayed to eat with him.

Long ago, a few years out of college, I learned the power of a casserole. It was general knowledge that the wife of an older workplace mentor—the editor of a major religious magazine—was out of town for ten days. Assuming a married man of my father’s generation wouldn’t know his way around a household kitchen, I went home and concocted a humble casserole. This experience would be long forgotten if he hadn’t seemed startled as I handed him the dish. “Why . . . this is the nicest thing anyone’s ever done for me.”

Maybe I was young and gullible, but his response seemed genuine. At the time, and sometimes since, I’ve thought, Poor Dr. Ken, if a tuna-noodle casserole was the penultimate kindness . . .

On the other hand, maybe the excessive gratitude was all about the unexpected gesture on the day I became his casserole friend.

Evelyn Bence is author of Room at My Table: Preparing Heart and Home for Christian Ministry, published by Upper Room Books. She lives in Arlington Virginia and has served as religion editor for Doubleday, managing editor for Today’s Christian Woman and senior editor at Prison Fellowship Ministries.

1 can cream of celery soup

1 5-ounce can tuna in water, drained

While cooking the noodles according to the package instructions, heat the sauce—the onions, soup, tuna, peas, and pepper. Drain the noodles and place in a 1-1/2 quart casserole. Stir the sauce into the hot noodles. If it seems dry, add a few tablespoons of milk or tuna water. Top with the bread crumbs. Serve immediately. Four servings.

Back in the day, my friend Dr. Ken probably got a casserole that featured canned peas, reminiscent of my mother’s pantry essentials. Without the tuna, the dish works well for vegetarians.

My favorite book on spiritual direction by Lynne Baab

Hospitality As A Call For All – Living...

Cassrole friends. Love that. I refer to friends who also have “refrigerator rights,” a phrase I heard some time ago.

Refrigerator rights, what a great phrase. Something my little neighbor friend seems to take for granted, Amy.

I had almost forgotten the days when a casserole for a friend meant comfort. Thank you fro reminding us of this.

May you cultivate a few (more) such friends.