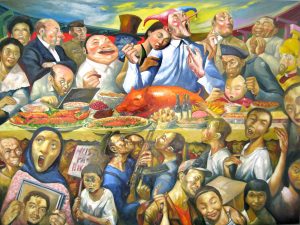 Hospitality has always been important for Tom and I, which has led to some interesting encounters and the founding of some wonderful friendships.

Once, about five years ago we had two young men arrive at our front door. Mormons we thought at first, then realized they were too scruffily dressed.

“Can we tent camp in your backyard?”  they asked.  They needed a place to stay for a few nights and had come across the Mustard Seed House while looking for intentional communities in Seattle. We invited them in and learned that they had just spent a year at the Sojourners’ community in San Francisco after graduating from Lipscomb University in Nashville Tennessee. They wanted to join a community in Canada but the Canadians didn’t want them to cross the border.

“You can’t tent camp in our backyard but you can sleep in our basement apartment.” we told them. When tenants moved into the apartment a few weeks later they transferred to our prayer room where they slept on the floor. A few weeks became months and then a year. By now they we close friends. They helped around the house and garden, becoming a vital part of our community.

Our angels unaware we called them reminders of Paul’s words: Don’t forget to show hospitality to strangers, for some who have done this have entertained angels without realizing it! (Hebrews 13:2 NIV)

They arrived just as Tom was starting to repaint our living room, a job that he thought he could do alone in 4 days – it took Tom, our two new friends and another helper 4 days together to do the job. how easily we could have missed God’s provision for completing this task.

On another occasion we returned from a trip to Australia to find they had stripped and refinished our dining room table – a special 60th birthday blessing for me.

The previous year a family of friends arrived from England without a place to say. The husband was ill and could not hold down a job. They move into our hospitality room and ended up living there for a year. They too helped around the house and garden. Build a children’s fort in the backyard that fifteen years later is still a special place for kids to play.

“Doesn’t having strangers in the house bother you?” we are often asked. “Isn’t it risky?” “Have you ever been scared?”

These are the questions that all of us worry about when we open our homes and our lives to be hospitable to strangers. And of course we all need to be careful, listening to the prompting of the spirit, and to the advice of friends, trying to discern when to say yes and when to say no. Sometimes we do make mistakes, conflict happens. Sometimes it is more stressful than we expect and we close our doors for a season. Sometimes we have to ask people to leave. Establishing appropriate boundaries is sometimes a slow and painful learning experience, but in the process we learn a lot about ourselves and about what it means to be the people of God. Slowly we are transformed into the inclusive, loving community of God’s kingdom.

In Reaching Out, Henri Nouwen reminds us that: Hospitality means primarily the creation of free space where the stranger can enter and become a friend instead of an enemy. Hospitality is not to change people, but to offer them space where change can take place. And it is not just those we invite in who are changed. We are transformed too.

Ironically the hardest guest we have had live with us was Tom’s schizophrenic son Wes. He moved into our basement after spending several years on the streets, refused to take meds and slowly sank into depression. Asking him to leave was one of the hardest things we ever did. Yet it was the best for both him and for us. He now has a small place of his own and we have established the best relationship we have had in years.

Wes taught me a lot about the strange and sometimes challenging messengers that God seems to take delight in using. Ezekiel, Isaiah, Jeremiah, in fact all God’s prophets heard voices and saw visions that would quickly have them labelled as schizophrenic today. Francis of Assisi too would be given short shift in our society. He not only spoke to animals, he took off his clothes, and gave away his money.

Being hospitable is not always easy, and it is not always safe, but the benefits far outweigh the disadvantages and it is I believe a doorway to the kingdom. Take the risk and like us you might find that you are entertaining angels unawares.

This post is part of the series Hospitality – Opening Doorways to the Kingdom which will run until the end of August. If you would like to contribute a post please do not hesitate to contact me.

An Adventure of Amazing Hospitality By Fay Williams

This is quite profound..I am savoring your words. When my son was adopted in a different state some distance from our home we were blessed to Mennonite Our Way…a family opened their home to us as total strangers. We stayed in their basement with our new little stranger, our son, for one month…they rejoiced and supported us on the first leg of our journey as novice new parents with a 4 pound baby not knowing what the outcome of the adoption would be until papers were signed and time elapsed. Thankfully, we were able to take him home and he is a strapping 22 year old today. His birth and the hospitality we received was a blessed and miraculous journey.

Linda thank you for sharing that beautiful story with us. Talk about angels unawares. I can imagine that this holds a special place in your hosts hearts too.