A Tribute to Maya Angelou 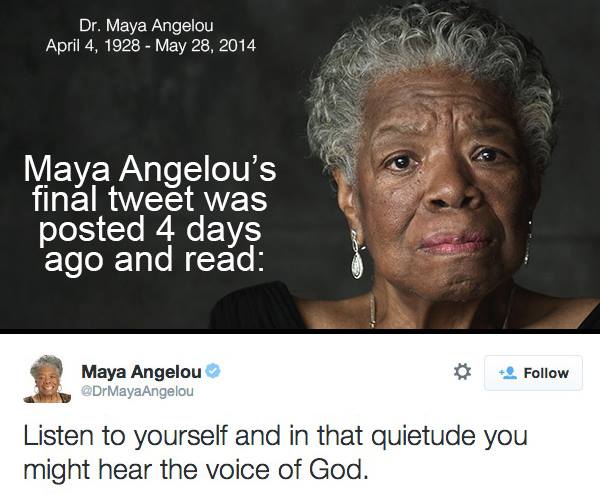 Yesterday Maya Angelou died. I regret that I didn’t really know much about her until I started reading the quotes and tributes posted during the day. She was a remarkable but definitely unconventional woman whose life touched millions. Angelou became an author at the age of 41 when she wrote her memoir I Know Why the Cage Bird Sings, which was followed by various works, ranging from autobiographies to children’s books and song lyrics for a musical. “I’ll probably be writing when the Lord says, “Maya, Maya Angelou, it’s time,” Angelou told TIME in 2013. 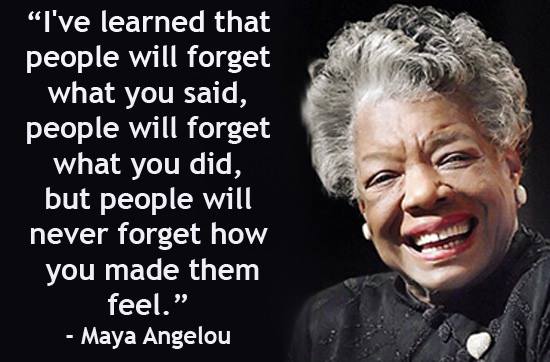 Angelou became the first black and first female inaugural poet in 1993 for President Clinton and left behind a strong legacy as a teacher and civil rights activist.

A commanding figure at 6 ft. tall, she rose at 4 or 5 every morning and went to a bare room at a nearby motel to work, alone with a stack of legal pads, a Bible, a dictionary, a thesaurus, and a bottle of sherry. (read the entire tribute) 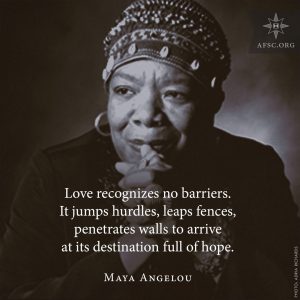 “What I would really like said about me is that I dared to love,” Angelou told an interviewer in 1985. “By love I mean that condition in the human spirit so profound it encourages us to develop courage and build bridges, and then to trust those bridges and cross the bridges in attempts to reach other human beings.”

And check out this short video of some of her more memorable quotes.

An Invitation to Summer Hospitality.

Live and Love in the Name of Jesus

Day of Listening, Learning, and Looking

A Liturgy of Remembrance for Nelson Mandela by...

A Tribute to Nelson Mandela – Quotes that...

Already, Not Yet – From Michelle Ruetschle in...

A Prayer for the People of the Philippines