Resources for Holy Week 2014 Stations of the Cross

This resources is out of date. Please see our latest resource list. 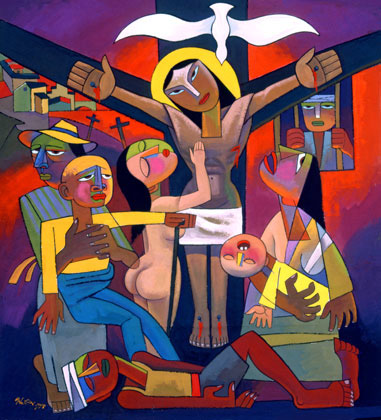 Art by He Qi

Last year I separated out the stations of the Cross from other Good Friday resources as I know many churches like to have Stations of the Cross available for people to walk throughout Holy Week. There are thousands out there but I have tried to put together a collection from around the world attempting to highlight some of the challenging issues of our turbulent world that are portrayed and have continued adding to that theme this year. Most of the images are far from the traditional stations of the cross though I have ended the collection with a mimed rendition of Sandi Patty’s Via Dolorosa. If there are other international images you think should be a part of this collection please add them in the comments.  I would like to continue to enrich this list each year and there is still enough time before Good Friday for me to update this post. Enjoy!

Lets start with an explanation of the stations of the Cross:

From a Catholic perspective

From a Protestant perspective Stations of the Cross by Indigenous Australian Shirley Purdue via abc.net.au

Cityside Baptist church in Auckland New Zealand has held an exhibit of contemporary icons to reflect on at Easter for a number of years. The photos shown were taken at their 2002 and 2004 presentations.

The Way of the Cross in Jerusalem

I also came across this  interesting set of Jordanian stamps which  Mansour Mouasher has found depicting the Stations of the Cross.

Rachel Gadsden is a British artist who is exhibited internationally and who works across the mainstream and disability art sectors, presenting cross-cultural visual dialogues that consider the most profound notions of what it is to be human. Her stations of the cross for St Joseph’s Cathedral Abu Dhabi are powerful.

From Church of Christ the King in Mt Vernon NJ – a contemporary set done in traditional mode.

This series by Gwynth Leech sets the traditional imagery of the Stations of the Cross in the midst of contemporary conflicts. They were commissioned by Saint Paul’s on the Green in Norwalk Connecticut in 2004. It is a heartrending presentation of the stations of the Cross using images of refugees from Iraq and Sudan as spectators and participants.

Im/migration Stations of the Cross by Nanette Sawyer. It’s a series of original art, looking through the lens of immigration/migration. How can the Jesus story teach us about immigration/migration issues, and how can the stories and experiences of immigrants and migrants increase our understanding of the Jesus story? Make sure you leave plenty of time for this one. Read the description and then click each station down the side – it is a very profound experience.

This series by Minnesotan artist Anne Brink is fascinating.

From Hawaii a fascinating series by Jean Charlot

And from Vancouver B.C. this series by Chris Woods

And another very beautiful, Korean Stations of the Cross by Korean sculptor Choi Jong-tae from Myeong-dong Cathedral.

I love this stations of the cross from Hekima College, Nairobi, Kenya. The designs were created by Father Angelbert M. Vang SJ from Yaoude, from the Cameroon who was a well-known historian, poet, musician and designer and executed by a Kenyan artist.

This meditation is a poignant reminder of those who struggle daily to carry crosses we cannot even imagine.

This Stations of the Cross series by Chris Gollon was commissioned by the Church of England for the Church of St John on Bethnal Green, in East London. Gollon took the unusual step of using his own son as the model for Jesus, his daughter as Mary, and his wife as Veronica. Fr Alan Green is cast as Nicodemus, and David Tregunna (Gollon’s friend and agent) as Joseph of Arimathea. The juxtaposition of real figures with imagined ones creates a heightened sense of reality. I think that the images are both compelling and powerful.

This series by David O’Connell hangs in St Richards Chichester is another powerful series.

Another series by Linda Sallnow in London

Multimedia Stations of the Cross from Loyola Press

Stations of the Cross Especially for Children

An excellent online video presentation from Jeruslaem.com I have not watched all of it yet but enjoyed what I watched.

And from Busted Halo an excellent set of virtual stations of the cross. These stations relate to Jesus’ teachings about the Kingdom of God and the reason his vision of this Kingdom led to his death. Find a quiet place to watch these stations, and as you do the devotions be open to how God is speaking to you through the Stations of the Cross.

Here is the first meditation

From the Netherlands: I found this mimed rendition of Sandy Patti’s Via Dolorosa very refreshing.

This is part of this series on Resources for Holy Week. Here are all the posts:

Stations of the Cross:

Prayer For Fourth Sunday in Lent

Am I Making People Homeless?