Why Should We Raise the Minimum Wage

Today is Labour Day here in the U.S. and I find myself reflecting on the plight of those who suffer because of low wages and inadequate benefits. My thoughts have been stimulated by several things.

First this info graphic that was posted on Facebook. 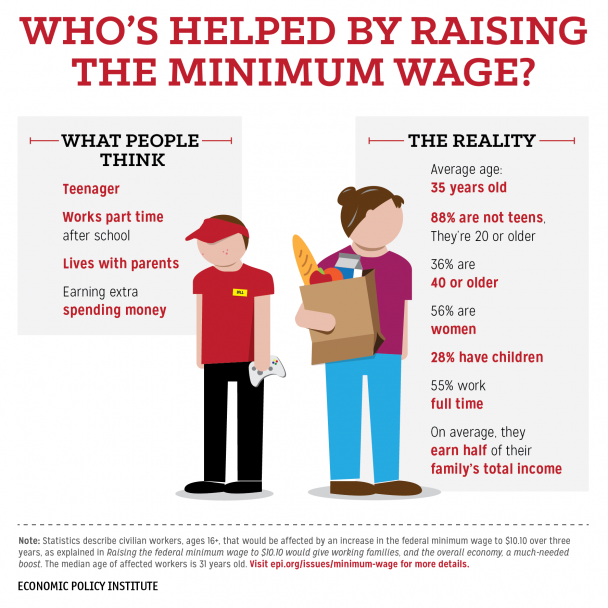 Second by this article talking about the budget that McDonald’s suggested for its minimum wage workers. It includes a second job and with only $20/ month budgeted for health care and $27/week for food and gas, obviously expects that workers will take advantage of food stamps and medicaid. One response I read to this article even mentioned these as justifiable additions to their income. Which sounds like corporate sponsorship to me.

My third stimulus this morning was this reading from James:

Yes indeed, it is good when you obey the royal law as found in the Scriptures: Love your neighbour as yourself. (James 2:5-8)

Loving our neighbours means being concerned for their welfare – that they have a place to live, nutritious food to eat and health care, education and retirement plans to sustain them just as we do.

In many countries of the world minimum wage is calculated on what it takes to live with 2 dependents – on one job. Here in the U.S. even two minimum wage jobs make that difficult. Most of these people are in the service industry – waiters in restaurants, maids in hotels. People live in their cars, sometimes whole families. Or they live in overcrowded apartments in the most dangerous parts of town. And they are dependent on food stamps and medicaid.

These people work very hard for a living (or should I say a non-living). I think they should receive a living wage. Yes it would mean we have to pay more when we eat out but surely that is part of the true cost of living. What do you think?

Prayers for the journey

Interruptions that Bless Our Lives

Embracing God’s Light as Hope in our Lives

I think there are 2 parts to the question of minimum wage….the folks that need and deserve a living wage…..and those who have no experience and do not deserve a higher wage…..the nasty part of raising min. wage is not just higher prices…but less work…min. wage has no meaning when you can’t get a job