Adam’s Windmill and the Welsh Revival by Dyfed Wyn Roberts 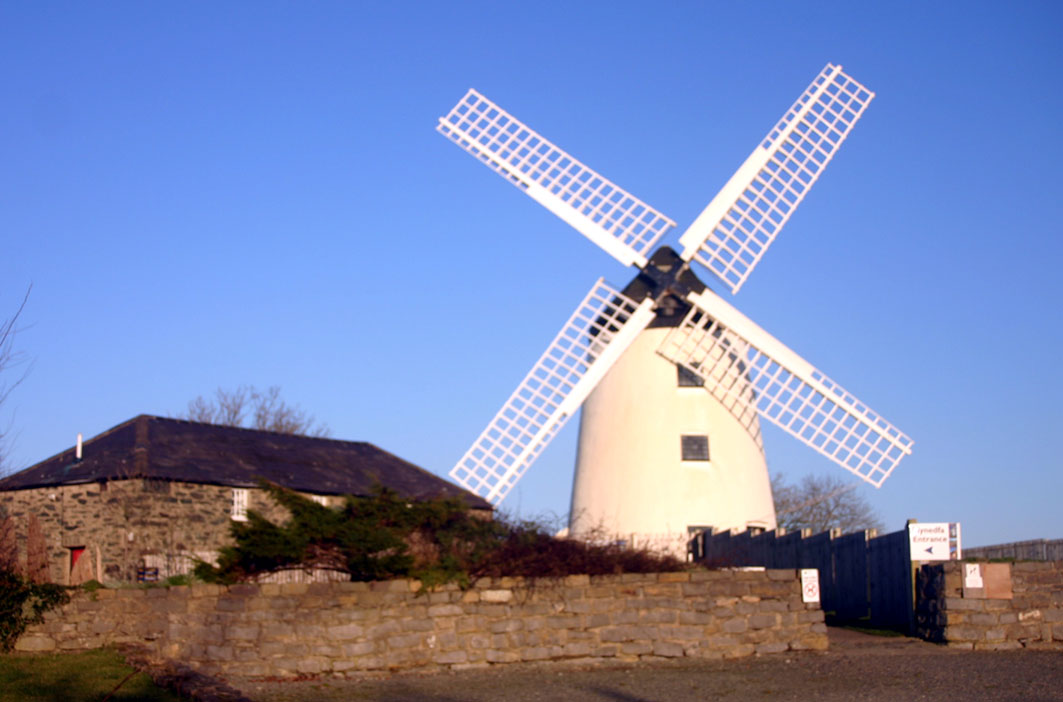 Llynnon Mill – the only working mill on Anglesey today. Adam’s Mill would have looked similar to this one in 1904.

Today’s post in the series Creating a Sacred Space comes from Dyfed Wyn Roberts. Dyfed is a native of the island of Anglesey in north Wales, UK. I love the story of how God created a sacred space in a windmill – not something that any of us would have thought of.

Dyfed is a student of Welsh Revival history and has a PhD from the University of Wales on the effects of Charles Finney’s revivalism upon the Welsh Revival of 1859. He blogs regularly at www.dyfedwynroberts.org.uk and has recently published an eBook on the aftermath of the 1904-05 Revival in Wales. He works as a freelance writer and theologian and conducts some services. His wife Helen runs the village post office.

The thud created by John Williams’s head hitting the low beam was noticeable to many in the room. That he himself had failed to notice the beam was surely down to the enthusiasm of the moment, but if he had felt any pain Williams ignored it and continued to praise his Saviour until the end of the meeting. Revival was breaking out all over Wales and now it had reached the northern most part of the country. Rather than begin in a traditional chapel, however, in the town of Amlwch on the island of Anglesey, revival began in a low ceilinged windmill.

The Welsh Revival of 1904-1905 is considered by the evangelical/Pentecostal stream to be one of the major outpourings of the Holy Spirit upon the church. The events deeply affected the churches and chapels of Wales with tens of thousands of individuals either coming to faith for the first time or having their relationship with God stirred by a burning passion. Further afield the effects were also felt, with some claiming that the Azusa Street Revival in the US had been sparked by what had happened in Wales.

The story of how the revival began is well documented – in a young people’s prayer meeting in a Methodist Chapel in west Wales a young man called Evan Roberts was touched to his core by what he believed to be God’s hand upon him. From there in the autumn of 1904 he carried the flames of revival to his home church in Moriah Chapel, Loughor, and he became the revival’s main figure for the next 18 months. But the revival’s spread was not reliant on Roberts, for quite independently of him other localities the length and breadth of Wales began to experience the outpouring of the Holy Spirit.

The town of Amlwch is perched on the north east Anglesey coastline. Today it is a rather depressed, run-down place but at the turn of the twentieth century it still enjoyed the success of the little port nearby and the previous wealth that came from the Parys Mountain copper mine was also in evidence. Like most Welsh communities it had a number of large nonconformist chapels, the largest being Bethesda – known locally as y Capel Mawr (the large chapel) due to its seating capacity of some 800 people. Revival meetings with Evan Roberts in attendance would indeed be held here in early June 1905 – with tickets being sold to those who wanted to attend! But there is little doubt that the revival itself was already well under way before this time.

On the outskirts of the town there is a small community called Pentre Felin (the Village of the Mill) with its own Calvinistic Methodist chapel, Capel Llaethdy. Early in 1904 the members had decided they needed a new and larger school room for the many activities they had in their church. In order to complete this task the original chapel had also to be demolished – thus ensuring that a new chapel as well as a new schoolroom was built. While this building work was being undertaken the members held their weekly services in the loft of the local windmill – Melin Adda (Adam’s Mill). These small windmills (as pictured above) were a very common feature on Anglesey at the time – a necessary power source to ground flour in a county rich with grain-growing land.

The small loft was full of people during these meetings – though there are no actual numbers available. On the third Sunday in November 1904 – with news of revival in other parts of Wales in the air – the congregation was larger than usual, with more people turning up late. Among the late arrivals was a minister, Rev H. Williams. Having sensed a different atmosphere, he stood in the middle of the congregation and shouted at the top of his voice, ‘My goodness me it is like Pentecost here’. Many began to pray out loud and others began to weep uncontrollably.  Among them was John Williams who hit his head on a low beam as he stood to pray. Naturally the room was not designed for a large crowd and certainly not for a church meeting, but for the people of Pentre Felin that Sunday morning it became the closest place to heaven.

My own assessment of the Welsh Revival is that it was a missed opportunity. However many individual lives were changed it also offered the prospect of reforming the church. Revival meetings were noted for the young people who took part, women also, and the far more democratic aspect of the whole congregation involved rather than just the minister from the pulpit. All of this was a break from the rather staid and safe nature of chapel meetings before the revival. Unfortunately, once the revival fires had died down the church returned to its normal state and the opportunity for reform was lost.

Maybe what happened in Adam’s Mill in November 1904 was another aspect of that potential for change. God was not confined to the grand chapels of Welsh nonconformity. He could break through into people’s lives wherever they were – even in a working windmill.

Check out the other posts in this series

Every Garden Needs A Sacred Space

Reclaiming a Sacred Space – Cheasty Greenspace: A Place of Goodness and Grace by Mary De Jong

A Garden of Inspiration – A Story of Leo Tolstoy

Symbols and Elements that Weave Together a Sacred Space

A Tree My Most Sacred Space by Ryan Harrison

We are Raising the Roof.

Adam’s Windmill and the Welsh Revival by Dyfed Wyn Roberts

An Invitation from Graham Kerr

Seasons and the Soul

FreerangeFriday: The Gift of Silence