Today’s post in the series Creating Sacred Space Do We Need Churches?  is contributed by The. Rev. Daniel Simons, Priest and Director of Liturgy, Hospitality, and Pilgrimage for Trinity Wall Street. He can be contacted at dsimons@trinitywallstreet.org. 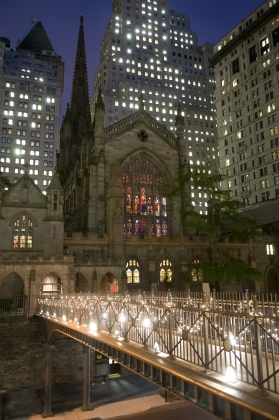 We worship in the architectural decisions of those who came before.

One of the great heritages that a church passes on is its buildings. Yet how we inherit the worship space of a particular time, make it our own, and hand it on to others is a delicate question. If we are mere preservationists then worship can be frozen, becoming itself an object of worship, which is idolatry and the death of lively spirituality. On the other hand, if we forget that we are just a tick of the clock’s hand in time and rebuild to suit the fad of the moment, we can mangle the coherence of a particular age’s architectural voice or leave behind a dated legacy that can’t speak beyond its generation (many churches are still cleaning up liturgical spaces designed in the ’50s and ’60s).

Trinity Wall Street is not exempt from these considerations. Our church (meaning the people of God) is housed in two spectacular edifices: Trinity Church, the third building on the site and now dwarfed by the elegant old skyscrapers of early Manhattan, but for many years the tallest building on the island; and St. Paul’s Chapel, a city treasure that is New York’s oldest public building in continuous use.

One of the tributes to the architects who designed Trinity and St. Paul’s Chapel is that the buildings have needed so little redesign over the centuries. Every time we put St. Paul’s to another use the founders would have never considered, we discover what perfectly designed proportions we’re working with. We have had dinners, concerts, dances, and classes there, and after 9/11 it was a clinic and a kitchen and a dormitory. And then, of course, we have worshipped in so many different styles there, and it all works harmoniously because those who built it were listening deeply to the poetry of the space.

But that doesn’t mean we haven’t radically changed those spaces. Somewhere along the line at St. Paul’s, the pew boxes that had kept people warm in winter became charming but impractical, and all but two, including George Washington’s, were removed. And then, about six years ago, the pews were removed entirely. Having experienced the capacity of the chapel to be something much more than a church, Trinity’s leadership listened deeply to the need of the moment and decided that the bones of the building could withstand, and even incorporate, that radical decision. In the years since, that choice has proved itself to be a good one, and once-skeptics now comment on what a new range the chapel has.

I’m not making a case for removing pews; I’m making a case for listening deeply both to a building’s heritage and its call to mission in the moment. There are often ways of having both. This year we are beginning to consider a master plan to renew the interior of Trinity Church. Much of it is the boring but important stuff: heating/cooling/sound/light. Some of it goes into that deeper stewardship of prayer: shall we make some of the pews moveable so that we increase the flexible use of the space? How does the altar area relate to the people, and is there a one-sizefits- all solution, or do we want flexibility there too? How do we make the rear of the church more welcoming to visitors—more porous to the outside world while maintaining its coherence and integrity?

As the architects work on these questions, we are all wrestling with this tension: any change we make affects those who come after us. In the same way that our architects gave us such good bones to work with in these buildings, our work has to be thoughtful and careful enough to be appreciated by our spiritual descendants, who will have different concerns from ours that we cannot yet see.

Tradition is the process of handing on the past to the future. In that process we inevitably leave our own mark. In every age the call is faithfulness to the Gospel as we hear it, the call to follow Jesus in our own time.

Sidebar: Our mark in some ages calls for great reform, in some ages holding steady, and sometimes we are even called to leave the building entirely. Look at your building—what does it say about the community that built it? How has it shaped you and how have you shaped it? How does it help or hinder you in living out the Gospel now? What do you think God is calling your community to do or be in this next chapter of mission, and how will that be reflected and enhanced by what you do with your building?

Check out the other posts in this series:

Every Garden Needs A Sacred Space

Reclaiming a Sacred Space – Cheasty Greenspace: A Place of Goodness and Grace by Mary De Jong

A Garden of Inspiration – A Story of Leo Tolstoy

Symbols and Elements that Weave Together a Sacred Space

A Tree My Most Sacred Space by Ryan Harrison

We are Raising the Roof.

FreerangeFriday: You are SEEN in your sorrow.

Rhythm of Life Retreat in Seattle

My Top Ten Ideas for Cultivating Hospitality in...

Very well written. I have often thought about the relationship of church buildings to the actual church, and this discusses it very well. Thanks for sharing!
http://stepstochangetheworld.wordpress.com/

Glad it was helpful