Were You There? by Mary Elizabeth Todd

Today’s post in the series Return to Our Senses in Lent is the second written by Mary Elizabeth Todd. Mayy was born in the mountains of Western NC and grew up in East Tennessee- She went to Erskine College and majored in Behavioral Science and Religion. She started writing poetry at 10 years of age, grew up listening to her father’s poems. She worked 28 years as a foster care worker and was awarded Social worker of the Year in 2004 for the state of South Carolina by the Foster Parent Association. She retired in 2006 and reckons she is a mountain woman thru and thru, loves the Lord but fails often, but always gets back up. 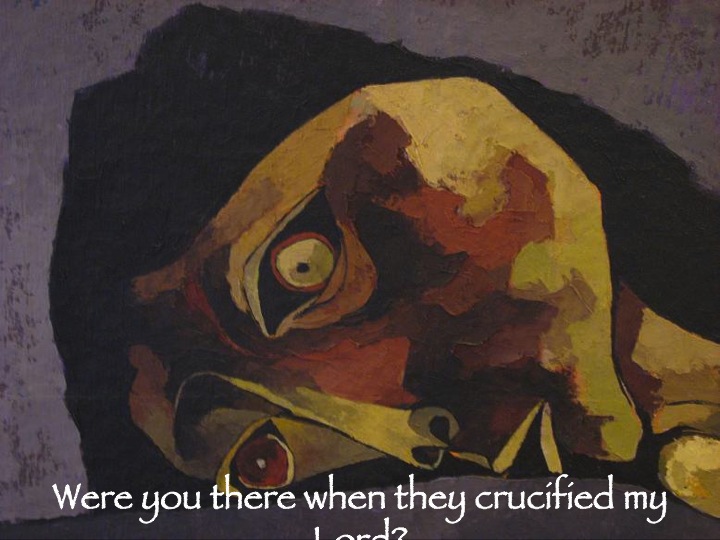 I was told that I needed to take up my cross and carry it.

It didn’t worry me.

What trouble could that be?

I had seen crosses made of brass hanging on the walls
Of small country churches.
I had been amazed at the majesty and workmanship
Of gold crosses encrusted with pearls and rubies.
I had seen small white crosses
Standing on the roadsides,
And I had worn a tiny gold cross.

I could do that…pick up my cross and walk.

But the Cross I was given wasn’t one of those I had seen.
It was rough new timber.
I lifted it to my shoulder and it was heavy and damp.

I said no problem…still sure of myself.
The first few days,
I called out and said look at me.
But then, I had to say no when I wanted to say yes.
The cross became heavier and heavier;
My hands were sweating and it would slip from my shoulder.
Splinters cut into my hands.
I picked it up over and over again.

I tried again to pick it up…just had to find the trick of carrying it.

I found that I tripped over the small stones.
My feet could not lift over them.
I thought how easy it had been.
I thought about all the reasons I picked up the cross;
No one told me how heavy it would be.

I was ready to ditch it…no one would ever notice.

I had seen others go to churches and smile
Sing songs of praise and go out the doors
To say yes to things they shouldn’t.
No one said to them, “Where was their cross?”
I wondered if it was that or they never really heard the question.

I laid the cross down gently…I could not walk away.

I sat down by the roadside.
My back hurt from the weight.
My hands bleeding from the splinters and cuts,
My feet were stone bruised and tired.
I buried my face in my hands.
Then I heard Jesus, as he washed my wounds and hurts,
“Why did you think you must do this alone?
I said I would be with you.”
He pulled the splinters from my hands and they healed as he said,
“Here, let me help you carry this.
I have been there and know the way.”
He wiped the tears from my eyes, and said,
“Come and rejoice; it is a beautiful day.”
He smiled and I smiled.

We picked up the cross…I knew I would follow Him anywhere.

“When they crucified my Lord?”*

I was blessed by the gift of this poem….

such a beautiful song!