The Dirty Job of Special Needs Parenting by Barbara Dittrich

Today’s post in the Lenten series Return to Our Senses is written by Barbara Dittrich. Barbara is the mother of three children, two of whom have a variety of special needs, Barbara Dittrich founded SNAPPIN’ MINISTRIES (Special Needs Parents Network) in 2002 and currently serves as its Executive Director.  The organization she leads was one of three finalists for WORLD MAGAZINE’S Hope Award for Effective Compassion in October of 2009, in conjunction with the American Bible Society.  With a unique vision for serving parents of children with special needs, she has led the SNAPPIN’ MINISTRIES team in developing an innovative parent mentor curriculum.  She has lives with her husband of 20+ years in Wisconsin and blogs at Comfort in the Midst of Chaos.  Barbara is also a contributing writer at Not Alone  and presents on topics relating to parenting children with special needs throughout the U.S..

I have several friends with special needs kids and have always felt that this is yet another segment of the population that is overlooked and abandoned. I was profoundly moved by the imagery of foot washing in this context and asked for permission to repost it after seeing it her: The Dirty Job of Special Needs Kids 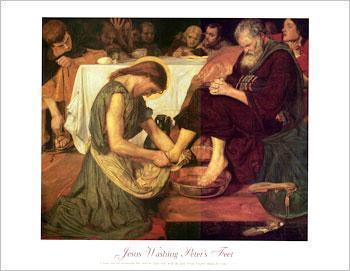 “Now that I, your Lord and Teacher, have washed your feet, you also should wash one another’s feet.” (John 13:14, NIV)

“Bloody noses are just a nuisance,” the hematologist proclaimed.  I melted into tears and frustrated anger as we stood there in the exam room, sleep deprived and disheveled, lacking a desperately needed shower.

“YOU live with this and see how much of a nuisance this is!” I cried in response.  The doctor softened her edge as I buried my face into my hands.  She knew it took a great deal to push me to a point where I lose my diplomacy with staff.

We were in a period of constant and unexplained bleeding for my son with severe hemophilia.  Despite having ever-increasing amounts of clotting factor infused into his little veins, he was suffering from daily nosebleeds that lasted an hour or more.  We couldn’t go to church, to school or even to pick up groceries without a bleed starting up spontaneously.  The night before this exchange with the doctor, my husband and I had awoken to our boy crying in the middle of the kitchen, with the floor covered in pools of blood like a crime scene.  The sight of all of the blood was not only upsetting to us, but even more so to our son.  The more he cried, the worse he bled.  One of us tried to hold him still, applying pressure to his nose while the other sopped up the sticky crimson mess.  It was a nightmare.  Once we got the bleeding stopped, I began the meticulous process of washing and rinsing the stains off of his face and hair, between his fingers and under his chin.  We changed his pajamas and bed linens, soaking laundry to be dealt with in the too-soon-to-arrive morning.

When we became parents to children with special needs, I expected the expensive medical bills; I expected the change in lifestyle and accommodations; I expected fear, and anxiety, and sorrow; but I never expected that it would be such a truly dirty job.  Between our son’s bleeding disorder and our youngest daughter’s severe and rare allergies, we have had to endure some filthy, thankless circumstances throughout the years.  There was the Christmas season where our daughter threw up under the tree with yet another severe allergic reaction that put us in the emergency room.  Fa La La La La!  Then there year our son was hospitalized with a gastrointestinal bleed.  That was an entirely new venture into rancid smells, disgusting testing and repugnant maintenance.  Those are merely two of the many “nuisances” that have driven us to adorn ourselves in disposable gloves while raising our precious kids.

I know most of you can relate to what I am saying, because you have told me such at camp or when I give a talk.  I laughed the first time a group of mothers confessed to me that if you have a child with any sort of special need, you probably also deal with some sort of bowel trouble.  There are some of you whom I have the highest regard for as you press on maintaining feeding tubes, changing the diapers of teenagers or practicing the meticulous sterile procedure of using a port-a-cath.  Regardless of what the dirty job is, it can be the one thing that drives us to tears, especially in our most depleted moments, crying out to God, “Why me?”.

Yet, God always redeems.  Jesus asked us to do just what we’re doing.  In a much less overtly spiritual or notable way, we parents of these remarkable kids are washing feet just as Jesus commanded.  When we do this for our children, we are doing it to and for Christ.  This thought certainly elevates that which feels incredibly unsacred and makes it profound, doesn’t it?  Carrying out our duties with love and pressing on is a tender act of worship that we dare not miss.

I will confess that this is rarely the way I want to worship God.  I want a more comfortable form of praise and adoration that doesn’t require the high cost of heart ache and personal humility.  Still, this challenge is the purest form of adoration, maintaining deference to our awesome Lord.

Over the years, I have learned to laugh about the disgusting parts of my parenting life.  I often joke that you could spray our house with the blood-revealing Luminol and see it glow from outer space.  While that humor brings relief and is evidence of acceptance, more pleasing still is the understanding that our parenting trials are all part of God’s mission to which we are uniquely called.  How blessed we are when we can reflect knowing our encounters with the putrid are actually a divine privilege.

Stranger at the Door by Mary Elizabeth Todd.

This is true of all of life whether or not our kids have “special needs”. Nice reminder

Wonderful reflection. This is also true of many who care for elderly parents or ill or dying adult children. So, this has lessons for all of us.

I agree Coe, It reminded me of a post in the Advent series on caring for those with Alzheimers.

[…] The Dirty Job of Special Needs Parenting by Barbara Dittrich […]