Which Seed Catalogues Can I Trust? 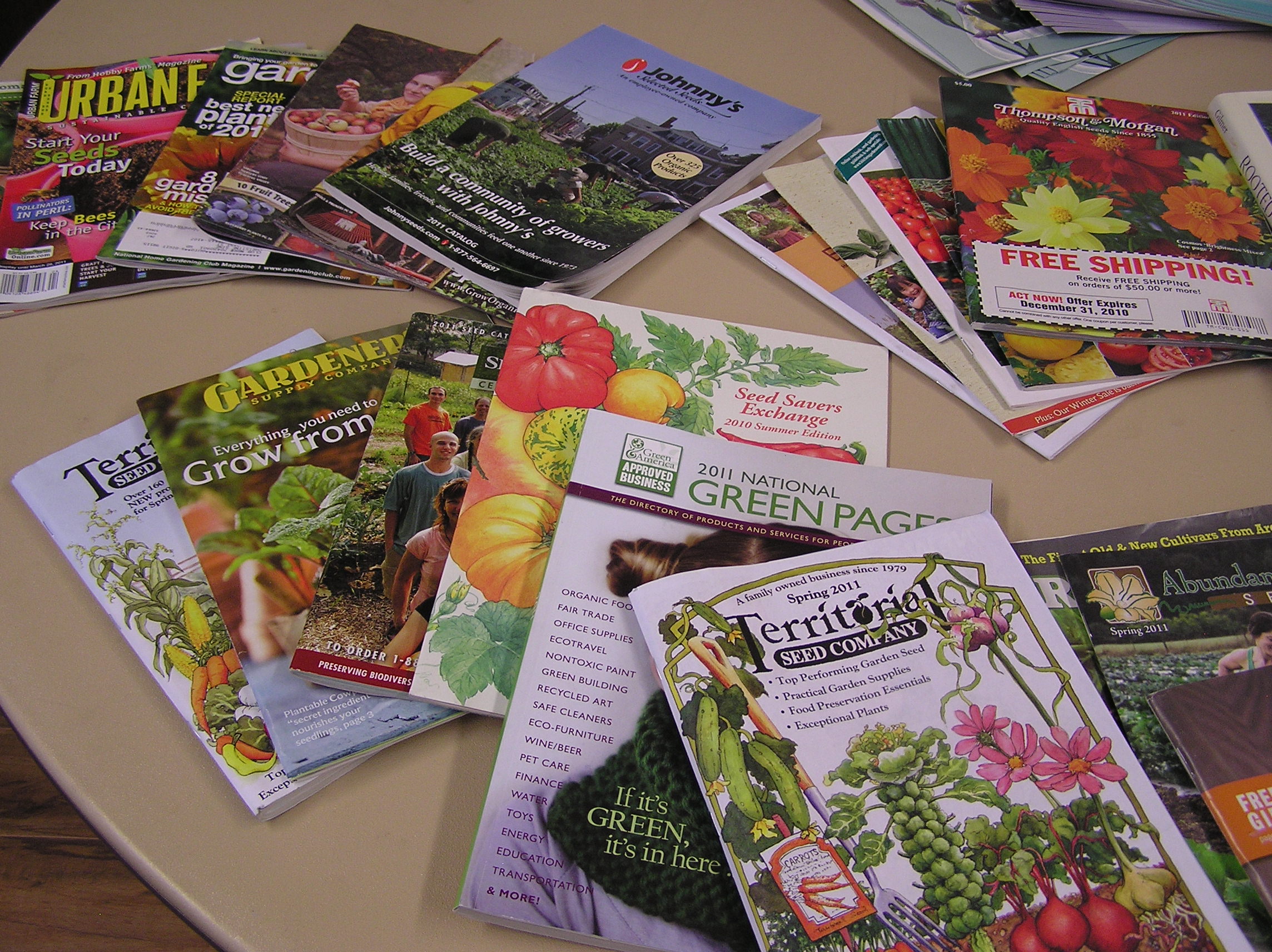 I mentioned yesterday that the seed catalogues have started to arrive. This is a great time to curl up by the fire and drool over all those wonderful photos in the seed catalogues that in your saner moments you know won’t grow in your climate zone but which you just can’t resist when it is too cold to grow anything. This year I have done some research on who owns our seed companies and which we can trust to have organic non GM seed.

or those that are based in the local Washington area

I also cannot resist a couple of big company catalogues like the English classic  Thompson and Morgan and Park Seeds which have products I can’t seem to find anywhere else.

Unfortunately I discovered recently that many of my favourite companies are owned by Monsanto or Mars.

Seeds of Change – I love their seeds but someone told me recently that they are owned by MARS  incorporated, one of the largest food conglomerates in the world. So though Seeds of Change itself provides ethical seed, non GM products, its parent company has a different philosophy. As Tim Stanton who alerted me to this commented: They present themselves as a warm, inviting, environmentally conscious company, but Seeds of Change has a money-hungry corporate core.  Tim goes on to say:

Even though Seeds of Change signed the safe seeds pledge (pledging to not sell genetically modified seed), Mars. Inc. spent almost 400k to defeat Prop 37 (which would have required the simple labeling of GM food so PEOPLE could make informed choices). Seeds of Change had been a New Mexico based company since the beginning (since it started out small and independent) but Mars uprooted it from original place of operations in New Mexico and moved it to Los Angeles, leaving almost their entire faithful New Mexico crew jobless. They even abandoned their warehouse cats in the process –

So if you want to get away from any seed company that is associated with Monsanto, here is a very helpful list that documents some of the companies owned by Monsanto who may be using GM food. Unfortunately I notice some of my other favourites (including ones listed above) are on the list. It also contains a list of those that sell safe seed even though they have not signed the safe seed pledge.

So you may also want to check out this link to where you can research seed companies that have signed the Safe Seed Pledge,

I would love to hear your comments on this. How do we decide which seeds to use? Should we be concerned about who owns the seed companies?

Time to Plan Your Garden

7 Tips for Sustainable Living on a Limited...

This is a very informative post. I can’t believe that I have never even considered that Monsanto owns most of the see companies. I typically use Seed Savers or Baker Creek, but in a pinch I may pick up some at the feed store. Never again. Did you notice that some of the companies who signed the safe seed pledge are also on the “owned by Monsanto” list? Such deception. Lastly, I am so disappointed in Seeds of Change. I have bought from them in the past, not realizing that they had been bought out.
Thanks for this info!

Yes I was discouraged too by this. It really makes you wonder about how much seed companies can be trusted. It looks as though grow your own seed and exchange with your neighbours are the best ways to go.

It’s so true, Mandi. They’re using the Safe Seed Pledge to placate and deceive consumers, hoping we won’t look a little bit deeper, that we’ll assume they’re a good company that cares about the well being of this planet and its people. It disgusts me.

Thanks Tim I really appreciate you giving me the nudge on this.

Well shut my mouth. I’m very disappointed to see Johnny’s and Territorial on this list. I knew about Seeds of Change, but not them.

Seems it’s getting harder all the time to find companies that are not part of the industrial complex.

Southern Seed Exchange is a good company and a good source for quality seed. Baker’s too of course.

Bill Territorial is one of my favourites because it is local to Seattle. I was very discouraged by this too.

Randy thanks for adding this. I remember you mentioning it but did not have the website

Another one of my favorites is Johnny’s Seeds, check them out too

Janet it is fixed now

Thank you, Christine, for this very helpful post! I appreciate the info and the links!!

Christine ~ great post! My focus is now on finding local, organic, family-owned seed companies that I can have a relationship with. Here are a few of my discoveries:

http://uprisingorganics.com ~ Uprising Seeds in Bellingham (in their catalog, the seed is linked to the specific farm where it was grown); small local family business. The majority of seed I use is from them and my germination rate was very high and I was quite successful with all I grew (including quinoa)! Certified organic/open pollinated

http://www.backyardbeansandgrains.com/ ~ another local project (out of the Bellingham area). Just purchased some of her seed to trial next year. organic/open pollinated

http://irisheyesgardenseeds.com/ ~ another local seed company (in Ellensburg, I believe) that many urban organic growers recommend. I have not tried their seed.

In addition, there are upcoming free seed workshops being offered at Greenbank Farm on Whidbey Island regarding seed, January 16 & 17. I am planning to attend on January 16th. http://greenbankfarm.biz/agriculture/agriculture-training-center/workshops-and-events/

Joanie I do think that is the way to go. I would love to put together a list for the Pacific NW – for other areas too if we can.

I am slowly working on compiling information for our area, but committed others would need to create lists for their area. I think the day of “corporate seed companies” is something we can no longer trust. I truly believe we need to go back to small, local family-owned farms to protect the integrity of our seed and our food system.

Bakers Heirloom and Seed Savers Exchange, I believe are still trust worthy sources. They are becoming the exception…

Amen to that Joanie

http://www.seedalliance.org ~ The Organic Seed Alliance is based in Port Townsend and is also a very important source of information!

What a blessing to be heard by you Christine! So many consumers simply have no idea who their favorite seed companies are in bed with any longer. They cultivate images of purity and community but are owned by or otherwise supporting the hostile takeover of our homes and dinner plates by corporate poison food. I agree wholeheartedly with the companies you’ve chosen to highlight – Peaceful Valley and Seed Savers (among some others mentioned in the comments) are the REAL DEAL and they’re a dying breed. They deserve our support! Thank you so much. 🙂

I recently received a list of seed companies and was curious why seeds of change wasn’t on it. Now I know! Thanks for the information.

Your welcome – it is a shame isn’t it. I have noticed that their seed offerings are not as good as they used to be too