Finding Love In A Hopeless Place – by Ruth Valerio 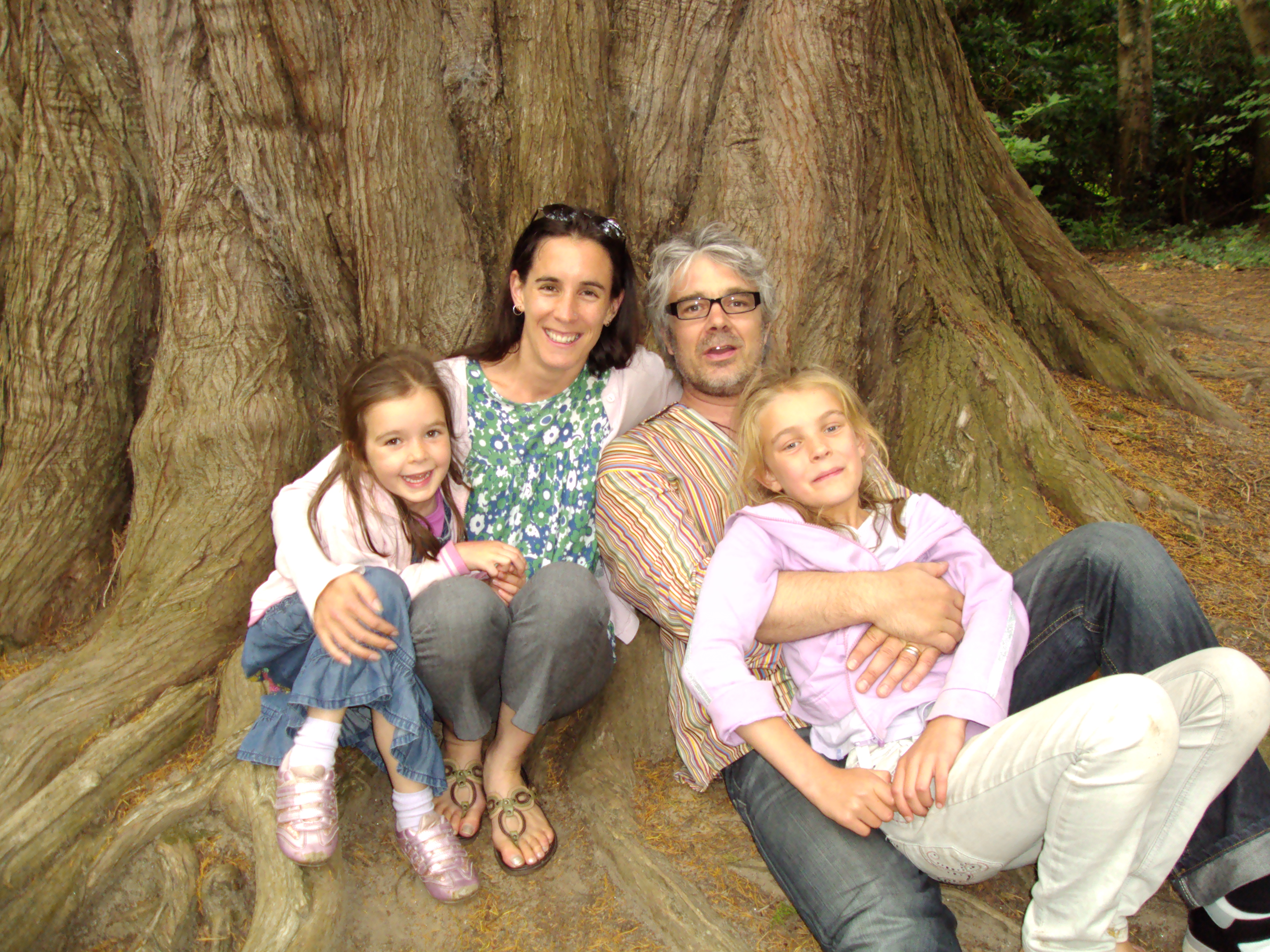 Ruth with her husband Greg and their two children

This morning’s post is by Ruth Valerio Community activist, Christian, academic, eco-warrior, mum, author, veg grower, wife and pig keeper rolled into one. She lives with her husband and two daughters in Chichester, England, where she is part of Revelation Church, leading a cell group and preaching regularly. She runs A Rocha’s Living Lightly initiative. Is part of the leadership of Spring Harvest and Director of Cred Jewellery.

She has written extensively on justice, environment and lifestyle issues, as well as writing Bible study guides for Scripture Union and CWR. Concerned to ‘practice what she preaches’, she has an allotment, runs a food cooperative and runs a pig-keeping social enterprise with friends. She is also very involved with Transition Chichester and runs the Chichester Garden Share scheme. She writes a regular column in Families First magazine, as well as writing for magazines such as Christianity and Third Way.

As we move towards the beginning of Advent I felt that it very appropriately challenged us to think about how we need to prepare to be God’s compassionate people in the turbulent future we face.

Rihanna might seem a bit incongruous on a blog to do primarily with issues around faith and the environment.  My time at the Lausanne Consultation on Creation Care, though, has provoked a lot of reflection on my part and left me mulling over some things, and as I’ve done so, we found love in a hopeless place, has been acting like a constant theme tune, going round and round my head. I want to try to give expression to something in particular here, and I would love you to help us develop this further together. Let me try to explain.

At present there is an ongoing debate within the environmental/scientific fraternity around the two concepts of mitigation and adaptation and which should take priority in terms of effort and investment. Mitigation represents those who say, ‘we’ve got to fight to see climate change reduced as much as possible; we’ve got to work to reduce emissions, to force or persuade business and governments to take action. We cannot allow it to be business as usual: we’ve got to put our efforts into bringing about change’. Adaptation, on the other hand, represents those who say, ‘that’s all very well, but we have to face facts and recognise that climate change is here and it is only going to accelerate, so we have to put our efforts into helping poorer countries (and ourselves) adapt to this new situation’.

Of course, I’m painting too simplistic a situation and most people would recognise that we need to be doing both. Still, mitigation and adaptation represent two differing approaches to the massive and awful challenges that face us, both now and into the future, and they provide a tension. Listening to the sessions at the Lausanne Consultation, I realise that this same tension is present analogously as we develop Biblical theologies of wider creation care.

Much of what we’ve been about so far has been to do with mitigation. Akin to business and government, the Church worldwide has failed abysmally to recognise the place that wider creation care should occupy in its life and understanding, preferring instead to focus only on individual human beings and their society. The Biblical understanding that many of us have been developing, therefore, has been concentrated on persuading Christians and churches that wider creation care is a central part of what the Christian life is about: that God loves this world and deems it ‘very good’, that he created us to look after it with compassion and servitude; that it has gone wrong because of us, and that the world and all its inhabitants are part of God’s plans for the future, rather than the future being about an exclusively human existence in heaven.

Whilst the Church in the UK has pretty much got this now, the Lausanne Consultation has opened my eyes to how far behind us the rest of the worldwide Church is, with some pretty shocking stories coming from some of the participants about their national churches. Our Biblical approach so far has, in effect, being saying, ‘Wake up Church! This issues is serious and it is something Christians should care about and be actively involved with’.

But is this enough? I am increasingly feeling that, while we still need the ‘mitigation’ approach, we increasingly need to develop the ‘adaptation’ side too. Bill McKibben’s article for Rolling Stones magazine back in July made for truly terrifying reading and was like a bucket of cold water after a beautiful dream. Business, Government, individuals (and the Church) are in an oil-induced coma and the likelihood of them waking up and taking the real action we need is becoming increasingly slimmer. The future looks very bleak indeed.

The question I’m struggling with is, how will we deal with this new situation as Christians? I am writing this not long after Hurricane Sandy left around 200 people dead and millions with their lives turned upside down. As the years go by, such situations of devastation and turmoil will become increasingly ‘normal’. Just consider one example: the Andes glaciers in South America. They are the water source for millions and millions of people, but are disappearing rapidly. What will happen in Peru or Argentina when they disappear altogether? We will face the decimation of countless numbers of people and other species. How will we cope with such a thing: what will it mean to be a follower of Jesus in such a situation?

Alongside the important message of our ‘theologies of mitigation’, we need also to be developing ‘theologies of adaptation’ that acknowledge the horrors of the future we will face – and that many are already facing – and that provide us with resources that help us live faithfully as followers of The Way in such times. Our task will be to discover how to find love in a hopeless place.

As an example of what this might look like, I felt prompted to read through Micah whilst at the Lausanne Consultation and was struck when I realised the context for the well-loved verse of 6:8. It comes in the midst of a damning tirade from Yahweh against his people, particularly the leaders, set against the back-drop of a court scene, in which the created order form the jury: ‘Stand up, plead your case before the mountains; let the hills hear what you have to say. Hear, O mountains, Yahweh’s accusation; listen, you everlasting foundations of the earth’ (6:1). Yahweh is calling his people back to repentance and to a life lived according to ‘his ways’ (4:2) and how does he want that to happen? Not through sacrifices and religious worship, but through a life that acts justly, and loves mercy, and walks humbly with him (6:8).

What will it mean to do that in a hopeless place, in our context of a world and people in crisis? That’s the kind of theology I think we need to be exploring.

10 Ways to Help Kids Give Back At Christmas