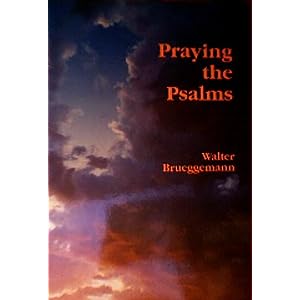 Praying the Psalms by Walter Bruggemann

Over the weekend I have been reading Praying the Psalms by Walter Brueggemann. I have so enjoyed this little gem of a book that I wanted to share some quotes with you. Not only does it address some of the issues of prayer that I am working on in my new book but it helped me to understand why, in a post modern era we are rediscovering the importance of poetry and the arts. I think that what he has to say here can apply to all scripture. In fact I have been thinking about it in regard to Jesus parables. THey have the same powerful ability to bring into being something that does not yet exist. Powerful stuff for us to consider.

In our culture we imbibe an understanding of language that is positivistic. That is, we believe that the function of language is only to report and describe what already exists. The usefulness of such language is obvious. It lets us be precise and unambiguous. But it is one-dimensional language that must necessarily be without passion and without eloquence and indeed without boldness. It is useful language, but it is not the language we have in the Psalms. Indeed it is not the language in which we can faithfully pray….

In the psalms the use of language does not describe what it. It evokes into being what does not exist until it has been spoken…. In using speech in this way we are in fact doing in a derivative way what God has done in the creation narratives of Genesis. We are calling into being that which does not yet exist…..

The first mode of language, appropriate to science, engineering and perhaps the social sciences, when used in the arena of human interaction, tends to be conservative, restrictive, limiting. It can only describe what already exists, and by its very use, deters anything new from coming into being. It crushes hope, for it cannot “imagine” what is not already present.  By contrast he bold symbolic use of language in the psalms is restive with what is. It races on ahead to form something new that never was before. This language then with its speech of liberation is dangerous and revolutionary, for its very use constitutes a threat to the way things have been. The creative speech of the poet can evoke new forms of human life which even the power of arms and repression is helpless to prevent….. The language of the Psalms permits us to be boldly anticipatory about what may be, as well as discerning about what has been. (17-19)

Refreshing Drinks from the Garden for the Hot Days

Reminds me much of Eugene Peterson in “The Contemplative pastor” where he remarks that our first language is that of intimacy, but we gradually lose that with the learning of instrumentality… have to relearn the first language in order to pray..

I have not read that one but I think you are right – the language of intimacy is creative & imaginative, it brings liberation and freedom, it encourages us to bring new things into being

@len1919 – I like what you wrote about the first language of intimacy. Scripture beautifully informs us that we were in God before the foundation of the world. God created us in Him in Gen 1;26, and then created us in vs 27. Yet, is is interesting that God did not form us until chapter 2;7 and breathed into our nostrils to become a living soul! The fact that God had the wonderful language of intimacy with us and Him before we even had a body provides explanation of why we experience such wonder and great connection when we connect with God in anointed prayer. You are so right kind Sir, let’s get back to the original language so our prayers can be effective and revelatory! Fred Gantt – 619-251-6886

I like that Christine. That description of language is useful and very interesting. Think about what that describes about the words, “I love you” and what they can mean. Not just describing something that exists but a commitment and enlivening something that will be. Good stuff!

Thanks for sharing this – I’ve been reading/praying Brueggemann’s Prayers for a Privileged People where he seems to be experimenting with language just as he describes.

Obviously another book I need to add to my reading list

This is wonderful, and so true. I can’t believe how apt it is, because it has been mooted that poetry be reintroduced into the British school curriculum. And I really think that the language being discussed is so powerful that those who connect and want to know more can only be encouraged and grow stronger in faith as the time gap between the writings and now are reduced to nil.

I think that you are right. As long as we read the Bible just as stories it really has little relevance but when we transpose the stories into our own experiences it makes them come alive, our faith is strengthened and our life is transformed