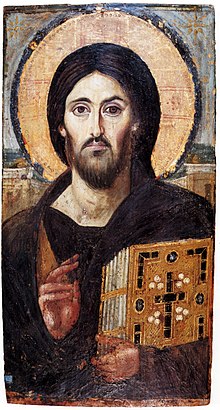 Icons are an integral part of orthodox worship and serve a variety of functions:

(1) They enhance the beauty of a church. (2) They instruct us in matters pertaining to the Christian faith. (3) They remind us of this faith. (4) They lift us up to the prototypes which they symbolize, to a higher level of thought and feeling. (5) They arouse us to imitate the virtues of the holy personages depicted on them. (6) They help to transform us, to sanctify us. (7) They serve as a means of worship and veneration. I shall discuss briefly each one of these functions  Read more on the function of icons at the Orthodox information centre

In recent years icons have been rediscovered by growing numbers of followers of Jesus from other traditions too. For many, icons contribute to the beauty of worship and are like windows that connect us to the realities of the Kingdom of God, bringing these into our prayer on earth. I love the idea that entering into church is meant to give us a glimpse into the kingdom of God and the icons are reminders of that great cloud of witnesses who have gone before. They can be a refreshing focus for both personal and group meditation.

Unfortunately, there is probably more dispute circulating about the use of icons than of any of the other tools I have mentioned. When Tom and I were in Lebanon some years ago, we were invited to lunch by an orthodox priest. What we did not realize until we arrived was that we were supposed to settle a long standing dispute between he and a friend as to whether or not the use of icons of Christ was acceptable.

The friend thought they were satanic, graven images that were expressly denounced in the Old Testament. Our orthodox friend explained that early Christians felt that the Old Testament proscriptions against making images was overturned by their belief in the incarnation. They believed that because God took on flesh in the human form of Jesus it was permissible to create depictions of the human form of the Son of God. Although icons are images, they are not simply illustrations or decorations. They are symbols of the incarnation, a presence which offers to the eyes the spiritual message that the Word addresses to the ears.

Why we worry so much about iconic images of Christ and not at all about images of Christ in other forms of art, I am not sure, but then of course, I am no expert. So I at least want to present this as one of the options that you might like to explore. For those that want to learn more, obviously, a Google search will provide lots of resources. However, one book you may like to start with is Windows to Heaven: Icons for Protestants and Catholics by Lela Gilbert and Elizabeth Zelensky.

And to round off your education, I thought some of you may appreciate this video using icons in association with the litany of the saints song by Matt Maher.